We set off for Finland on the 19th June very excited about the prospects of our very first encounter with wild, European Brown Bears. Our journey took us from London Heathrow to Kajaani (Ka-ya-nee) via Helsinki and without any delays! We arrived very hungry and looking forward to a bite to eat upon our arrival at the Martinselkosen Eräkeskus wildlife centre.


The journey from Kajaani to the wildlife centre was approximately 2hrs by car and we spotted Raindeer, Black throated divers and a Moose on route which made for a great start to our adventure.


Arriving at Martinselkosen Eräkeskus at about 22:30hrs we were quite tired and after a quick bite to eat and drink we were shown to our room where we settled in the for the night readying ourselves for the exciting day ahead.


The Martinselkosen Eräkeskus wildlife centre is situated in the Kainuu Wilderness area and a place called Pirttivaara. The area is very close to the Russian border and amidst the spectacular Taiga Forest.
(Click on any image to enlarge) 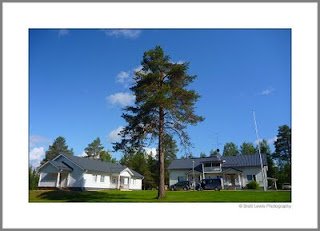 Following a healthy breakfast, I was given the opportunity to head out to a spot where a Great Grey Owl had set up her nest. The area was owned by the family of one of our guides and he said that he would take people out to view the nest site for the hefty sum of €50..! However, despite being a bit of captive audience, you can't blame the guy for trying to make some extra cash since the price of living in Finland is really quite expensive.


I knew that this was probably going to be a once in the lifetime opportunity to photograph this magnificent bird in the wild and at its nest site, so I agreed to pay the sum and headed out. Fortunately the young had not fledged and the setting provided a good opportunity for some intimate photography with this otherwise elusive species. 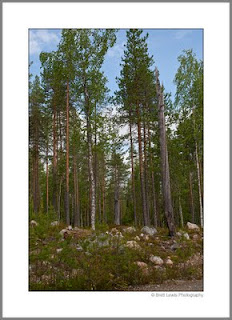 The nest site and the Great Grey owl sitting on the nest at the centre of the image
The owl seemed very relaxed in our presence, having been photographed many times by previous visitors. Nonetheless we set up some camouflage netting aside our vehicle and tried to make as little fuss as possible whilst in her presence. The rewards were great and not only did we get to spend time viewing her and taking the odd photograph or two, but we even got to see both her chicks! Unfortunately, the male was no longer around to help rear this brood and therefore the onerous task was left to the female alone and so the life of her chicks hangs in the balance. 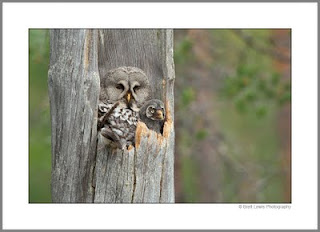 Female, Great Grey Owl at rest whilst one of her two chicks looks out
at the vast forest beyond its nest.
After spending a few hours in the presence of these great birds it was time to return to Martinselkosen Eräkeskus in order to have some lunch before heading out to the hides for the evening viewing of the bears..!
Following a nice hearty meal we prepared our camera gear and doused in mosquito repellent (50% deet) before setting off for the 'Swamp' hides for our first bear encounter. The location of the hides are just a short car journey from the centre followed by a gentle 1Km walk into the forest to reach our location. Unfortunately the evening was very overcast and the heavy rain was being blown about by the wind.. Not ideal for photographing bears and I was almost worried that we might spend our first night without even a glimpse of a bear..!
The hides are very simple in construction and not much bigger than the footage of a common garden shed, albeit much shorter in height, even for me..! They have a simple foam covered board that double as both a seat for the duration and a place to lay and get your head down for some sleep when the bears are absent. The walls are punctuated with windows covered in camouflage material in which to pass your camera lenses through and with one-way viewing windows between. 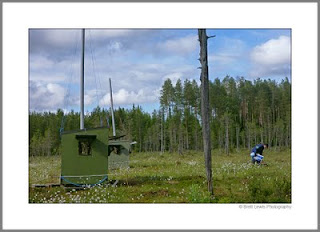 The hides a long 'flu stack' to carry scent away from the hides.
The centre owner distributes 'dog food' around the area to entice the bears in. 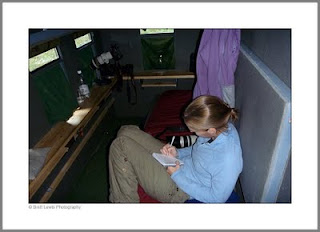 Inside the hide showing the seating/sleeping area together with the
windows and camera 'port-holes'.
Just in case you were wondering.. The toilet is situated under the seating/sleeping board and is by means of one or two plastic 'ice-cream' tubs with lids on, that never get washed out..! You use them, they get emptied and left for the next people to use..! Plenty of alcohol hand wash was used during our stay!
And so we waited....
Soon the bears began to arrive... 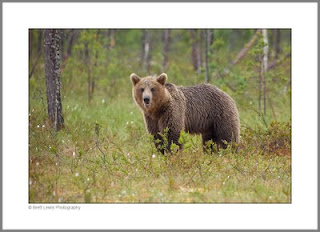 You can see from the dense coat just how wet the weather was for our first
night, making conditions for photography very difficult.
However, just spending time watching the bears was truly awesome.. 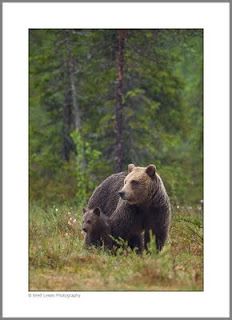 Soon a mother and her two cubs arrived, one being obscured by his
mother in this image. 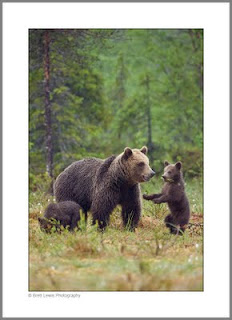 Showing the family unit together. 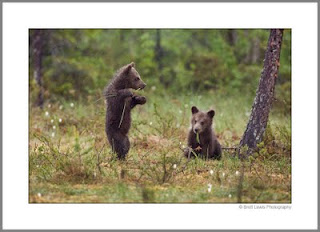 The young cubs were into everything and were very playful, entertaining us
photographers for much of the evening, despite the rain. 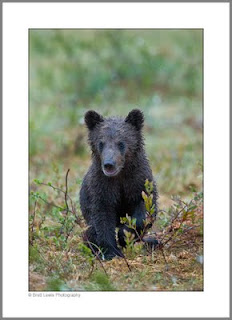 Despite their thick little coats, the cubs soon became
waterlogged..! 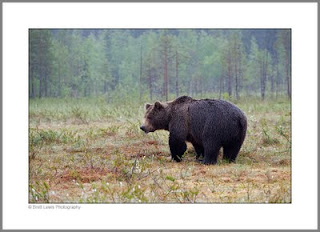 Following some truly memorable times with the mother and her cubs,
soon we were visited by a very large male. His presence making the mother a little
apprehensive over the safety of her cubs. 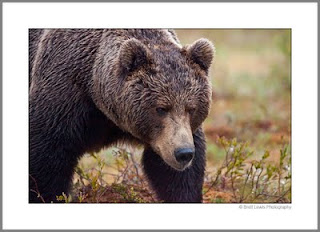 You can see from the scarring on his nose, he's not a bear to be messed with!
Although not the alpha male in the area, he's still a formidable candidate.
Some of the markings and scars help to identify individual bears.
So, despite the heavy rain and dark, overcast conditions we were presented with some truly memorable events and first time encounters. We had approximately 13 individual bears visit the area around the hides on this evening and I had very little sleep as I didn't want to miss a thing..! At 7am the following morning we were collected form the hides and taken back to Martinselkosen Eräkeskus ready for breakfast and some shut-eye..!
To Be Continued.....
Posted by Brett Lewis at 00:00